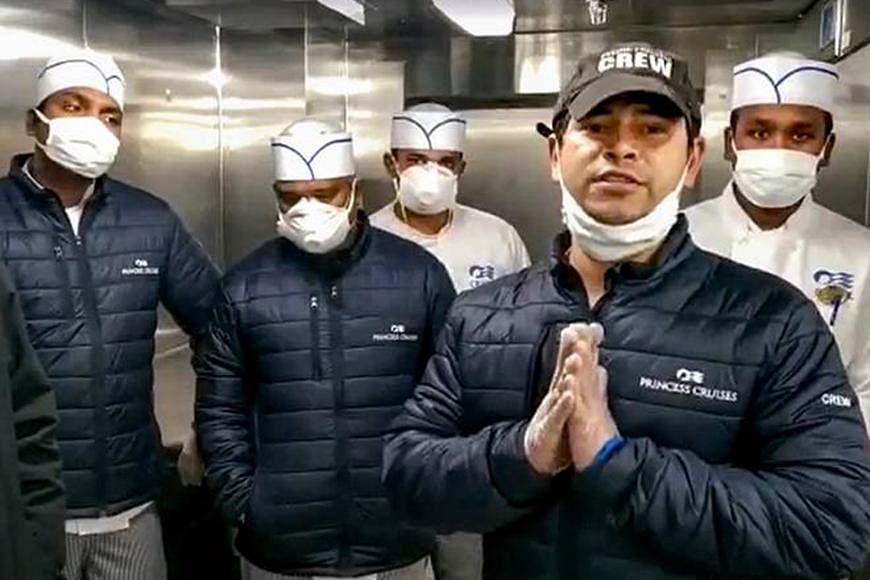 Two Indian crew members have tested positive for coronavirus on a cruise ship off the Japanese coast, the Indian Embassy in Japan confirmed on Wednesday.

The Diamond Princess was quarantined with almost 3,700 passengers and crew members aboard on Feb 3.

It hosts the highest concentration of coronavirus cases outside China.

A passenger carrying the virus had disembarked from the British-owned ship last month in Hong Kong.

It is carrying 138 Indians and arrived in Japan early last week.

A total of 175 people on the ship have so far tested positive for the coronavirus.

The quarantine has now been extended till Feb 19.

On Wednesday, an Indian security officer aboard the ship sent out an appeal for help to the Indian government.

Ms Sonali Thakkar was placed in isolation on Monday, a week after the ship docked at Yokohoma on Feb 3.

"We are scared that if the infection is spreading, it is spreading so fast that we could also become one of them. We don't want to. We just want to go back home," she said.

The 24-year-old officer's interview with NDTV came even as the Diamond Princess reported 39 new coronavirus cases.

And, as the situation on the ship worsened, compounded by the delay in getting back results on tests being performed on passengers, she sent out yet another appeal to the Indian authorities.

"We want the Indian government to take us back to India and isolate us there. Or at least send some more medical staff across to help these people with the tests. We want to go home," Ms Thakkar said.

She told NDTV that she has already informed her friends and family in Mumbai about her situation.

"They are really worried about me, they just want me to get back home. They are praying day and night for me, and that's all they can do from their side," she said.

"And I just want to tell (my parents) to stay strong, stay positive. Your girl is going to be back soon."

The ship's Indian crew had sought assistance from the Indian government earlier too.

Last Sunday, Mr Binay Kumar Sarkar, a chef from north Bengal, went on social media to appeal to the Indian government for help.

"Please somehow save us as soon as possible. What's the point if something happens (to us)... I want to tell the government of India, Modi-ji, please segregate us and bring us back home safely," he said.

Mr Sarkar said that he and his team members are "scared".

Speaking in Hindi and flanked by five other crew members, he called on the Indian government and the United Nations to enforce an "urgent segregation".

Those who are healthy should be allowed to disembark before they, too, contract the coronavirus, he said.

"Day by day spreading… rapidly," he wrote, "and risking everyone's lives." Speaking to Business Insider later, Mr Sarkar described the situation on the ship as "out of control".

He said that Japanese authorities should be screening everyone on board for coronavirus.

"People are willing to wait till the results come back, but, if they don't test positive, they should be allowed to leave the ship and go home to their families," he said.

"There are lot of people who don't have coronavirus, so why are we all being confined here?"

The only people being screened for the virus are those whose temperature rises above 37.5 degrees Celsius.

"Please save at least those of us who are healthy," he said.

"What is the point of coming after we have all been infected or worse?"

A constant worry, though, is "who will be next".

Being trapped on the ship is fanning fears that "very soon we will all be infected," he told the paper.

While plenty of his teammates are worried about losing their jobs if they speak out, Mr Sarkar told Business Insider that his only priorities are his health and family.

More than anything, he stressed, he wants to stay alive.

A third Indian, who is also a cook, echoed the concerns of his crew mates, reported The Washington Post.

"This was my first job, and this has happened to me," he said.

"I am stuck here, and I don't know if I will go home alive."

The man said that he had not been tested for the virus but that he fears more will soon fall ill.

"I am scared. I don't know what will happen tomorrow," he said. "We want to go home."

Princess Cruises did not respond to a request for comment about the conditions of the crew members, but the Japanese government said it is working to improve their situation.

"We are aware of their concerns, have heard voices that more needs to be done to improve their conditions, and we have been considering measures to address those issues," Mr Masami Sakoi, a senior official in the health ministry, said.

The Indian Embassy in Tokyo responded with an assurance that it is "constantly monitoring" the situation.

When the ship arrived off Japan, authorities initially tested nearly 300 people for the virus, gradually evacuating dozens who were infected to local medical facilities.

In recent days, testing has expanded to those with new symptoms or who had close contact with other infected passengers or crew, and several more cases were reported.

Those who remain on the ship have been asked to stay inside their cabins and allowed only briefly onto open decks.

They have been asked to wear masks and keep a safe distance from each other when outside, and given thermometers to regularly monitor their temperatures.

"I want to tell the government of India, Modi-ji, please segregate us and bring us back home safely."