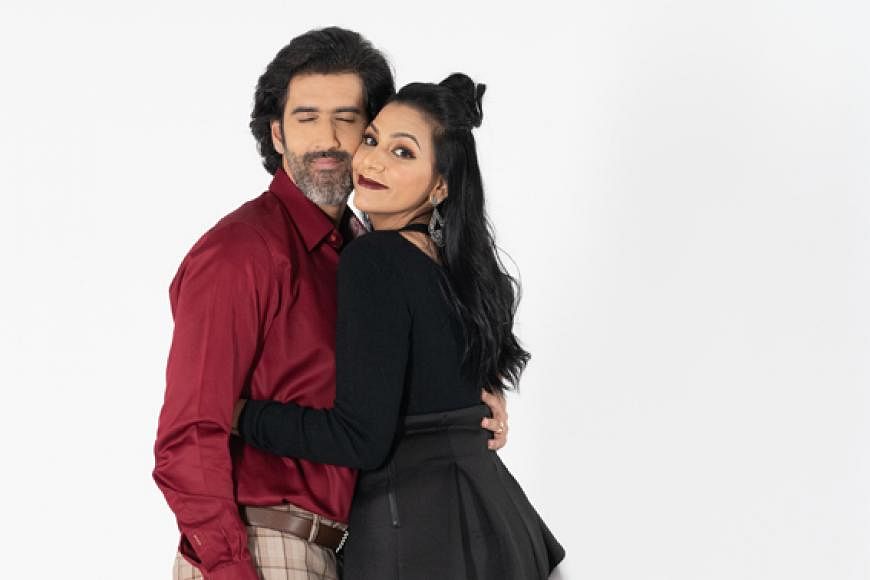 Many couples in Singapore go to romantic spots such as Gardens By The Bay, Sentosa, Clarke Quay or a fancy restaurant on Valentine's Day.

Stand-up comedians Rishi Budhrani and Sharul Channa prefer Mustafa Centre. "Besides being able to buy extra Colgate toothpaste at 50 per cent discount, the shopping centre's aisles allow us to play hide and seek," said Rishi, 35 . "It is the most romantic place for us."

According to Sharul, 33, her husband will loudly call her by different names, such as Amma Vyjayanthi, Shanti or Shakuntala. "I will ignore him and hide in the aisle," she said. "He will come looking for me and find me. We will hug, laugh and have fun together."

This year, the pair will not be spending money on buying flowers or gifts for each other at Mustafa. Instead, they will be making people pay to watch them perform at the Capitol Theatre on Feb 14.

They are joining hands after five years to stage The Rishi and Sharul Show 2, which will include elements of stand-up and sketch comedies. They will share the secrets of a "not-so-perfect" relationship and how humour and laughter help them get through any challenge.

"We will tackle issues of love, sex, marriage, family and what all of these mean in Singapore," said Rishi. "We will be facing off and ribbing each other. Our script is original. We have written songs too which will be sung by, among others, Sharul's sister Harsha."

In 2015, Rishi and Sharul last performed together at the Goodman Arts Centre during Valentine's Day. After that they went their separate ways, doing individual comedy and talk shows, theatre and compering events.

"For five years we have been making money individually," said Sharul. "Now we have decided to cheat people together." A laughing Rishi corrected her. "What she means is 'treat' people," he said.

An unconventional relationship and outlook to life have helped the couple sail through six years of marriage. They have cast aside tradition and convention that rule most Indian families and surprised relatives, friends and fans with their open-mindedness, accommodativeness and understanding of each other.

"Having a sense of humour in love can help you remain in love," said Rishi. "The idea of romance is different for everyone. Our idea is laughter. Yours might be music, travel, religion or yoga. Whatever it is, don't conform to the commercial idea of romance. Find out what your true romance is. That will take you through, like how humour and laughter have taken us through."

The ability to laugh at the dictates of society has stood them in good stead since they met 13 years ago as students. Both were members of the dance group Tez Dhaar (Razor's Edge) who performed Bollywood numbers at Indian weddings and events.

"We used to charge $50 for an item and performed together for a year," said Sharul. "But people were not happy with us. They asked, 'Your parents are doing well, so why are you dancing at weddings?'

"Those days children spent their father's money and studied overseas. But we were learning performing arts at LASALLE and communications at NTU."

The pair were intent on doing what was close to their hearts. "We connected as dancers but also as actors," said Rishi. "I was doing communications at NTU. But watching her perform on stage inspired me to do theatre. I got a scholarship from Singapore Repertory Theatre. Similarly, Sharul went on to do a degree in communications awarded by the University at Buffalo after she finished her diploma in theatre arts acting from LASALLE."

Watching Sharul acting on stage for the first time also made Rishi fall in love with her. But their path to eventual marriage was not all hunky-dory.

Sharul came from a middle-class Punjabi family, while Rishi belonged to a well-off Sindhi household.

"Although his parents were fine with our relationship, his grandmother was not happy at all," said Sharul. "She believed that a Sindhi boy must marry only a Sindhi girl. It was a shock to her that her grandson was bringing home a Punjabi girl."

But over time Rishi's grandmother, Parpati Narain Das, accepted Sharul. "I understood that she came to Singapore (in 1964 from India) on a ship (along with Rishi's father)," said Sharul. "Her husband had arrived earlier and set up a souvenir shop at Changi Village. She got her four children married here. I really appreciated that she was open to change. If she had said no, our marriage would not have happened."

However, immediate marriage was not on Rishi and Sharul's minds. They wanted to first build their careers. They were making decent money from doing theatre classes, voice lessons and corporate workshops. But they wanted to stand out in comedy and theatre. "One of our dreams was to make it big in Bollywood," said Sharul. "We used to sit outside the HDB block and talk about it. When Rishi was offered a well-paid job as a full-time trainer, I told him not to sell his soul to the devil."

Sharul's hard-nosed drive to ensure thriving careers derived from her middle-class upbringing. Her father, Kamal Channa, 64, arrived in Singapore from India in 1976 to work as a chef at Holiday Inn. He later set up several eateries. Her mother, Sujata, 57, is a teacher. "Both my parents worked hard," said Sharul, who is the middle one among three sisters. "I learnt from them that to achieve your dream you have to work hard."

At Rishi's end, things were more traditional. His father, Parkash Budhrani, 63, ran a successful tailoring business at Change Alley (now it is located at Chinatown) and his mother, Monica, 57, served as an assistant. There was no pressure on him to take over the business as the future of retail was unclear. But he was expected to study hard and become an engineer at least.

"When I became a comedian, there was a different kind of pressure," said Rishi, who has a younger sister. "People laughed that a Sindhi guy went into comedy and brought a Punjabi girl home. But they didn't understand my journey. I didn't want to be with a Sindhi girl. I was happy that I connected with a like-minded person."

People also talked that a Punjabi girl, who would have otherwise done nothing, got into comedy and married a rich Sindhi guy. "Indians are weird, they said I have upgraded," said Sharul. "But, although I was with a Sindhi guy, he had no money.

"What got us together was each had things the other did not have. I brought madness and rawness. He brought discipline and stability." They registered their marriage in April 2013 and held a formal wedding reception in November 2015. But throughout they were intent on consolidating their positions in showbiz and theatre. Through hard work and with a wide, engaging repertoire, they became sought-after comics, emcees, stage actors and TV show hosts.

"We understood that we both have our own independent needs," said Sharul. "We gave each other space to breathe and grow." The couple don't hang out with just Indians. Their friends range from ages 19 to 50. Sometimes, due to work commitment, they go to parties alone.

"He doesn't judge me," said Sharul. "I never tell him not to drink with his friends. When he gets drunk, I watch him and laugh."

To Rishi, it is Sharul's presence that is reassuring. "It is my show and she is watching," he said. "There's pressure, but it is very romantic." They spend their free time travelling and discovering new places and things. During the New Year holidays, they visited Nepal. "Mine was mostly a spiritual trip," said Sharul. "He went paragliding and on nature treks. We don't put pressure on each other. We have learnt to adapt and grow."

They also discuss personal issues openly. Like having a baby. "I love my work and a baby is not possible at present," said Sharul. "Rishi understands this. I will only have a baby with someone who has a nine to five job, a stable income and who can afford a helper."

Currently, their baby is a four-year-old male Maltese Poodle. "Bubble is the light of our lives," said Rishi. "I have even taught him to deliver a rose to Sharul on Valentine's Day."