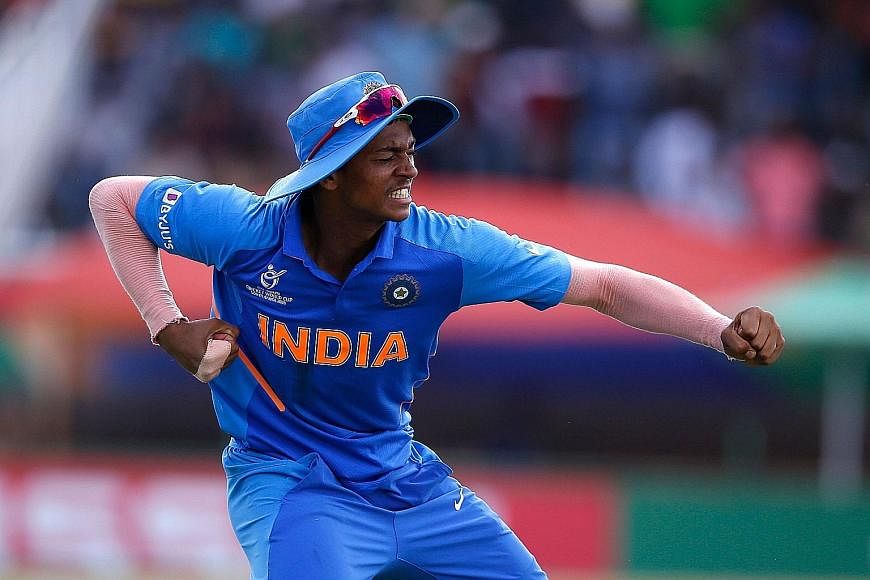 Yashasvi Jaiswal accepted the Player of the Tournament award last Sunday. But he was not happy.

India had just lost the cricket Under-19 World Cup final to Bangladesh by three wickets in Potchefstroom, South Africa.

Despite finishing the tournament as the highest run-getter (400 runs in six innings), the pain of not holding the cup was evident on his face.

"He was obviously upset with the team's loss but he has seen so many ups and downs that I am sure he will be able to celebrate his individual achievement soon," his mentor Jwala Singh told The Hindu.

The 18-year-old had five 50-plus scores - including a hundred. The only time he didn't get a half-century was against Japan when India were chasing only 42. However, more than the staggering numbers, it was the Uttar Pradesh-born left-handed opener's maturity that stood out.

When India suffered a batting collapse against Pakistan in the semi-final and Bangladesh in the final, it was Yashasvi who held both the innings together with knocks of 105 not out and 88 respectively.

The U-19 World Cup has often served as a platform for young players to gain international stardom. Current India captain Virat Kohli, New Zealand skipper Kane Williamson, Indian batsmen Shikhar Dhawan, Rohit Sharma, Cheteshwar Pujara and many others are the products of this youth tournament.

Yashasvi has certainly made a mark which augurs well for his future. But it has not been all easy for him. The lad had to make ends meet by selling panipuris (a type of local snack) on the streets of Mumbai in his initial days after his father (Bhupendra Jaiswal, a shopkeeper) moved to the big city for work in 2012.

"There wasn't much cricket played in my village (Suriyawan in Bhadohi, Uttar Pradesh). I love cricket and playing the sport gives me immense joy and pleasure. I used to watch Sachin (Tendulkar) sir bat and from that time onwards I wanted to be in Mumbai and represent Mumbai," he said last December.

"When I came here (Mumbai) with my father, I used to visit the Azad Maidan. I loved playing cricket there. I started practising there but my father said 'let's go back home'. But I said I will stay here and play for Mumbai.

"I took all my stuff and came to Azad Maidan. At that time, a match was happening and my coach told me that if I performed in that match, there would be a tent for me to stay in. I played that match and performed really well. As a result, I got to live in the tent. But it wasn't easy for me as there was no light and no toilet."

Limited monetary means meant that Yashasvi had to find ways to keep his passion alive.

"During those times, I didn't get much support from my family," he said. "So I used to sell paanipuris in the evening and earn some money.

"It was an embarrassing situation for me when the players with whom I used to play would come to the shop I worked in. I used to feel so bad because I would score a century in the morning and in the evening I used to sell paanipuris.

"But it didn't matter whether it was a small job, as it was important for me. Yet my only focus was on cricket."

However, his determination to become a cricket hit soon began to falter. It was then that Jwala, a coach at the Maidan, spotted him and decided to take him under his wings.

"When I saw him for the first time (aged 11) practising at the Azad Maidan in 2013, I could see myself in Yashasvi," said Jwala. "His passion, determination and zeal to excel reminded me of myself when I had arrived in Mumbai (from Gorakhpur in Uttar Pradesh) as a budding cricketer (later knee injuries dashed his hopes of playing at a high level).

"I realised then that his intense practice sessions lacked direction and guidance - exactly what I experienced growing up. So I decided to groom him. Knowing what I had in mind for him, his parents were happy. We've almost become a family since."

Yashasvi said: "I didn't have the money to buy food and didn't have a place to stay either. However, sir told me to just focus on cricket and he would take care of everything else."

A dairy shop owner let him stay at nights for menial jobs and he started taking the game seriously.

Then in October, he became the world's youngest cricketer to score a List-A double century.

The rise has been quick for the youngster since and his inclusion in India's U-19 World Cup squad hardly came as a surprise.

"Extensive practice sessions and hard work, immense concentration and dogged determination to succeed lead you to success. And that is how I would describe Yashasvi's journey," said Jwala.

"Over the last few years, I have watched Yashasvi evolving into a mature batsman, showing a lot of temperament.

"In Mumbai, he has senior cricketers around him, so he has the freedom to play his natural game. But here (at the World Cup) he knew he's probably the most crucial part of the team's batting. That's what makes him special - his adaptability."

Despite the disappointment of missing out on the champion's trophy, Yashasvi can revel in becoming the fifth Indian - all four of his predecessors (Yuvraj Singh, Dhawan, Pujara and Shubman Gill) went on to represent the India senior team - to be crowned the Player of the Tournament.

The youngster has already been picked by Rajasthan Royals for the upcoming Indian Premier League season for a whopping Rs2.4 crore ($468,000).

Bigger things are definitely destined for him.

Jwala stresses he is "satisfied" with his ward's performance, but insists it's just the beginning. "The real challenge starts now. It's the end of age-group cricket and he realises that we have to work harder to achieve the real goal (of playing for the Indian senior team). I am sure he has it in him and we shall start working as soon as he returns (to India).

"I strongly believed then as I do now that it is his past struggles that will make him big in the future."

"I strongly believed then as I do now that it is his past struggles that will make him big in the future."